What is Selenium WebDriver?

Inarguably, testing is a crucial part of a software development life cycle. The pressure of debugging and fixing the errors in the code before delivering it to the client is gigantic. Selenium WebDriver, with its inexhaustible list of features, has evolved as a frontrunner among the automation testing tools.

First off, the Selenium automation tool is an open-source, portable tool that is cost-effective, flexible, time-saving, and efficient at the same time. Next, it not just minimizes the errors of manual testing, but with its priceless features like cross-platform functioning, browser independent, multi-language support, and ease of implementation Selenium WebDriver has become one of the preferred testing tools by various organizations like Google, ThoughtWorks, Mozilla, etc.

The maestros in the IT field believe that Selenium WebDriver is here to survive for long; essentially the present and future of the software testing world.

On high-level, the Selenium Suite has four components, · 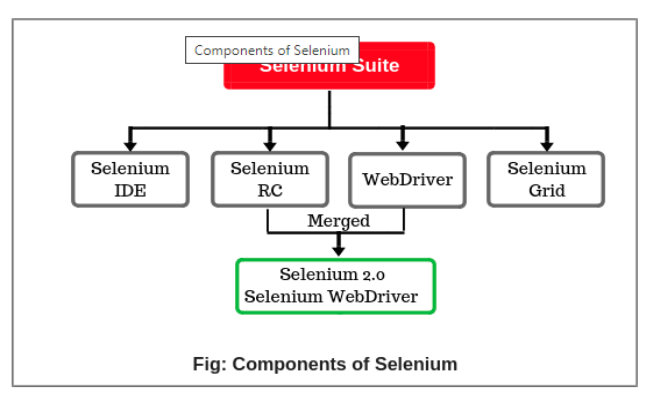 What is the story behind the evolution of Selenium WebDriver?

To overcome the inefficiencies of Manual Testing, Jason Huggins, then an engineer at ThoughtWorks developed a testing tool named JavaScriptTetRunner using JavaScript in 2004, which was later renamed to Selenium Core in the years to come.

Selenium Core was tested and tried, incorporating a lot of improvements during the process, and Selenium RC which is also called Selenium 1, arrived in 2005. It has proven to be a flagship testing framework for a long period of time as it allows the users to develop codes using multiple programming languages like Java, C#, Python, Perl, Ruby, PHP.

Selenium IDE was developed outside the USA, in Japan in 2006. Selenium IDE is effortless to install, being a Firefox add-on/Chrome extension and easier to use, nevertheless, it can only be used for running simple test cases. With its record and playback feature, along with edit and debugging abilities, it can automate the testing process on the browser. However, the browser interaction is limited using Selenium IDE. To make up for the gap, the Selenium RC was used for running complex test cases.

The WebDriver, on the other hand, has emerged to be the perfect solution to all the limitations. With its ability to strike a direct interaction with the browser through code snippets, it has more control over the browser behavior and actions.

Selenium Grid was developed in 2008 to work hand in glove with Selenium RC which is essentially to enable repetitive parallel testing across various browsers and machines.

Then Selenium 2 or Selenium WebDriver has emerged in 2009 after merging the powerful WebDriver and Selenium RC.

What are the advantages of learning Selenium WebDriver?

Selenium WebDriver has proved itself to outweigh any form of software testing as it has improved the overall quality of web-based testing by far.

What concepts are covered in the Selenium Course?

Who can do a real-time project on Selenium?

The IT professionals with a good knowledge of Selenium WebDriver and Java are eligible for this project.

Selenium WebDriver is currently the most sought-after test automation tool. In the live Selenium Project, the testers will basically automate the Selenium test cases. The interns will get a chance to create and execute automation scripts under the guidance of our expert mentors and other team members.

What are the advantages of doing a Selenium Project?

Working on a live Selenium project is quintessential for any amateur Selenium tester. In fact, it is an integral part of Selenium training. A real-time Selenium Project will help our interns grow individually as well as a team player. On completion of a Selenium Project every intern would have:

What will you learn during the Selenium Project?

The user-friendly Selenium IDE with its powerful component WebDriver is currently ruling the roost in the test automation market. During a typical live Selenium project every intern will learn:

What milestones are met after the completion of the Selenium Project?

Upon the completion of the live Selenium Project, all the interns would be conceptually stronger. Though they are mainly concerned with the testing/debugging part of the Software Development Life Cycle (SDLC), they would have gained knowledge of the different stages of it.

Each intern would emerge out as a leader after having gained the experience as a good team member in a fast-paced IT environment.

Every trainee will be ready to face highly tricky interviews as they have gained practical experience by then.

What happens after the Selenium Project?

Once the Selenium project is done with, the next on the list is the resume-building session with the Project Lead himself.

This is where our placement division chips in. An appealing resume is prepared by our experts and then when the candidate is confident, the job profile is forwarded to all the suitable requirements. Once shortlisted, the trainers will mentor him for the upcoming interview by providing him tips/etiquette to easily crack the interview.

Once the candidate is placed, there is no stopping!

Drop Us a Query